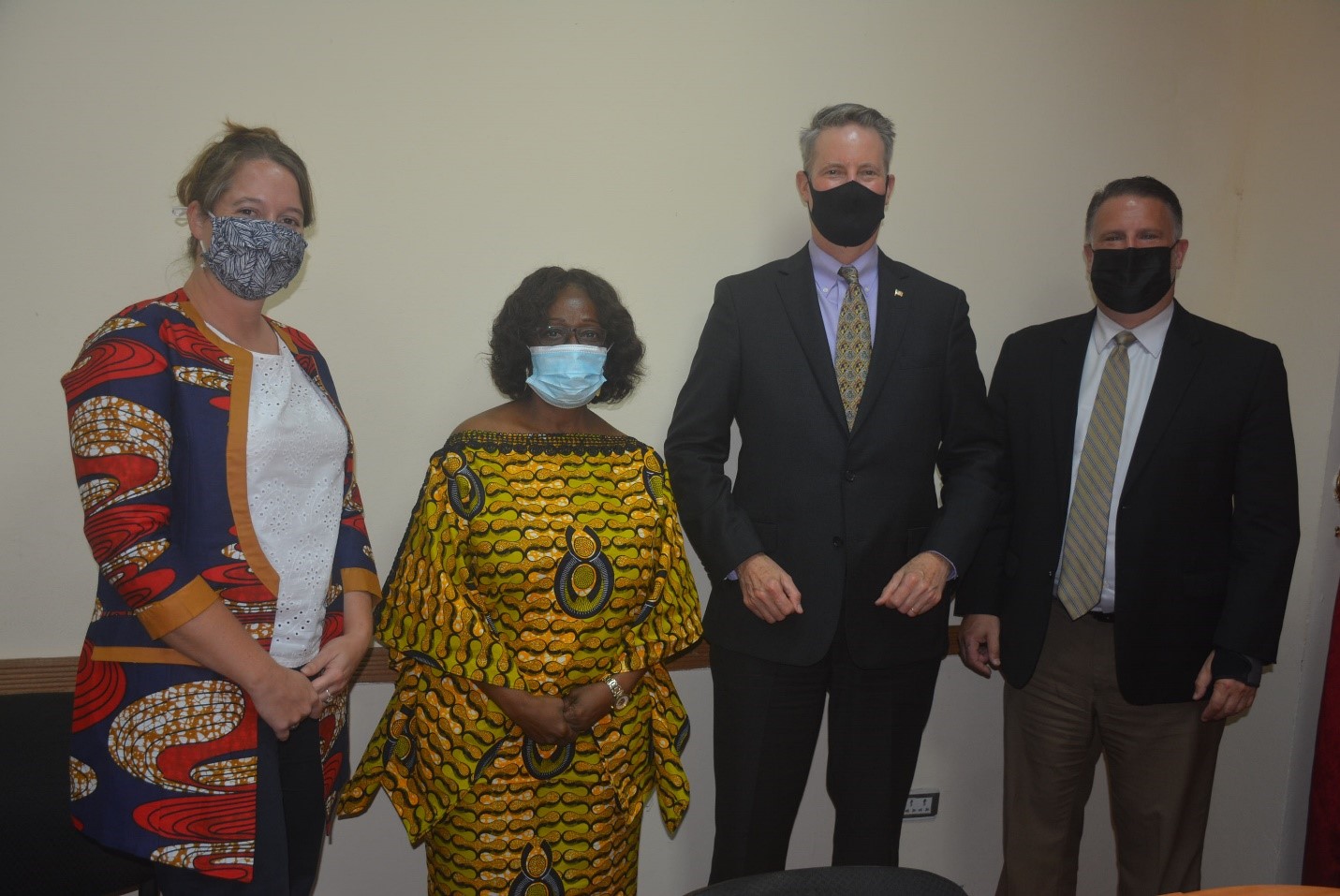 MONROVIA, 24 March 2021, Wednesday, the Ambassador Extraordinary and Plenipotentiary of the United States of America to the Republic of Liberia Michael A. McCarthy, at the head of a three-person delegation, paid a curtesy call on the National Elections Commission, (NEC) Chairperson, Hon. Davidetta Browne Lansanah, on 23rd March 2021.

Ambassador McCarthy lauded the efforts of the Commission for successfully conducting the Special Senatorial Elections and Referendum amidst the challenges faced by the Commission. He noted NEC worked assiduously to deliver these elections when it was perceived otherwise.

The Ambassador was interested in NEC’S planning process for the 2023 General Elections; in particular, funding and other need support to implement electoral activities pre- during and post elections, as well as measures needed to ensure dispute resolution was held in time according to statues.

Welcoming Ambassador McCarthy and entourage, NEC Chairperson spoke about ongoing 2023 budget formulation and other preparations which would be submitted to the authorities within weeks. She noted, early submission should provide ample time for sourcing and delivery of funding to the Commission to address many if not all, but the major challenges confronting the Commission including contracting lawyers to handle electoral complaints out of the 2023 General Elections.

Ambassador McCarthy assured the Commission of his government’s support for democratic elections in Liberia, underscoring, that NEC, as the institution to conduct free, fair and credible elections, must receive in time, all the support necessary to do its work. Assuredly, that the US Embassy remains a partner to the democratic processes in Liberia.

The NEC Chairperson noted that in-spite of donor fatigue the Commission was hopeful that the cordiality expressed by Ambassador McCarthy would subsist throughout the US Embassy’s engagement with the Commission. The US Embassy, through the United States Aid for International Development, USAID, has provided support to NEC in the areas of Administrative Strengthening, Electoral Education, Stakeholders Engagement, Electoral Law Reform, Support to NEC’s Data Center and Strategies toward the prevention measure of COVID-19.

Ambassador McCarthy, who arrived in Liberia on 6 January 2021, is a career member of the Senior Foreign Service, class of Minister-Counselor. Before coming to Liberia, He has worked in various capacities in Johannesburg, South Africa, Juba, South Sudan, Frankfurt, Germany, New Delhi, India and Asmara, Eritrea among others. Members of the US Ambassador’s delegation were, Ms. Mary Zell, Elections and Political Processes Team Lead and Mr. Joel Kopp, Political and Economic Counselor.