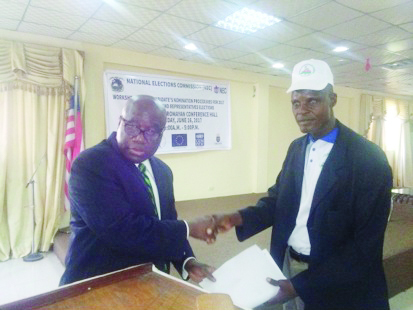 The certification program, which was held in the James M. Fromayan Conference Hall on the compound of the National Elections Commission in Sinkor, brings the total number of registered political Parties in Liberia to 26.

Before presenting the certificates, NEC Chairman Jerome G. Korkoya said the formation and organization of political party is guaranteed under the constitution of the Liberia to create a space for debate for the promotion of Liberia’s democracy.

Chairman Korkoya said the inclusion of a total of 26 registered political parties in the country clearly demonstrates that Liberia’s democracy is working.

He challenged the four parties to use as their basis for operations all of the elections laws and the constitution of Liberia.

In separate remarks, the Chairpersons for the Organizing Committees of the four newly accredited political parties praised the NEC for the level of understanding and professionalism they demonstrated during the process leading to the accreditation of their respective parties.

The Chairpersons of the Organizing Committees of the four parties promised to conduct all of their activities in keeping with the elections laws.

Below is the full listing of all 26 registered political parties: