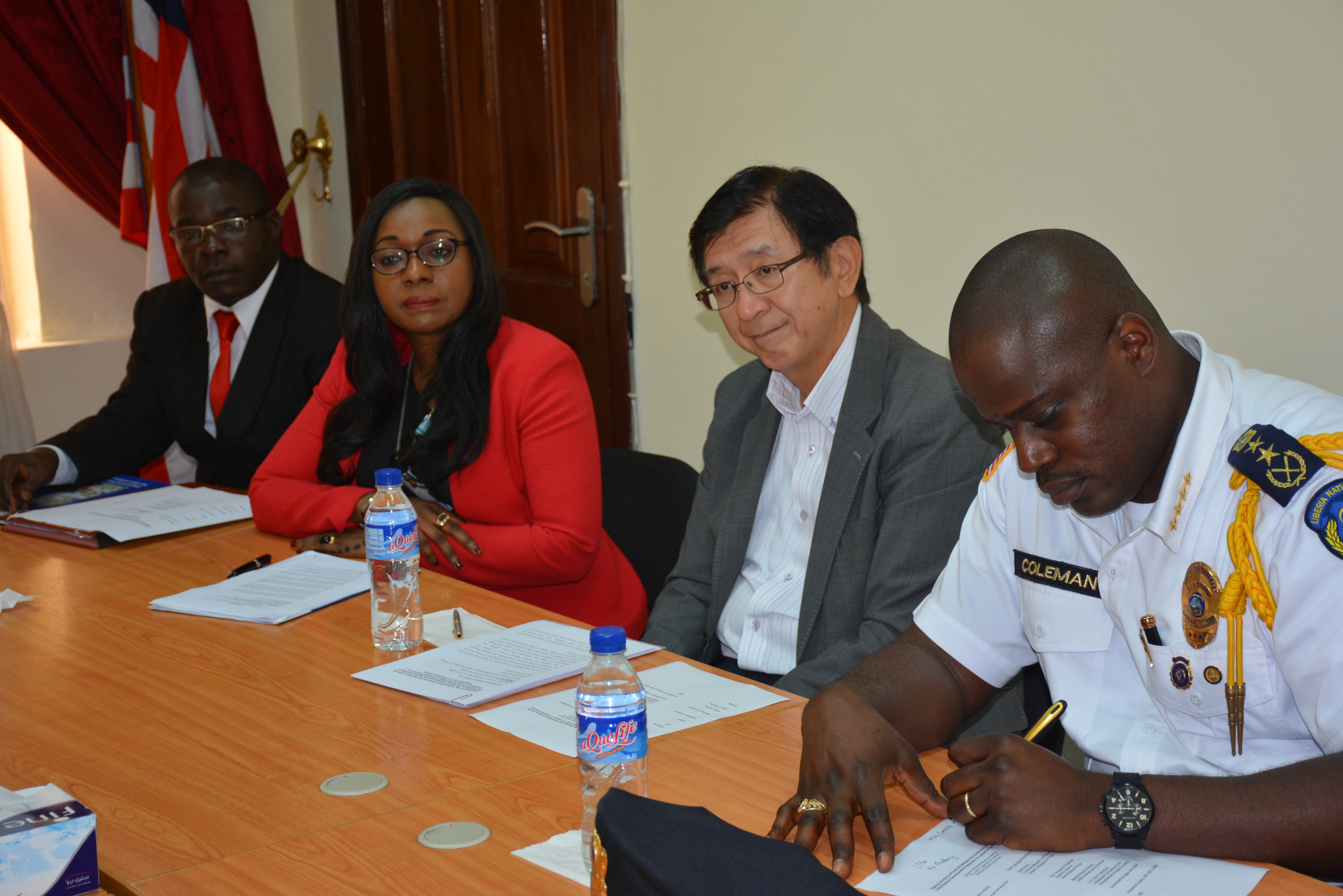 With more concerns being raised over the logistical ability of the Liberia National Police (LNP) to provide adequate security protection to avoid violence during the conduct of the October 10th 2017 Presidential and Representative Elections in Liberia, the Government of Japan today, September 7 2017 signed a grant agreement valued nearly 1.14 million dollars with the United Nations Agency, United Nations Development Program, UNDP for the Project called “Support of Electoral Security” across Liberia.

The agreement was signed by the Japanese Ambassador to Liberia Kaoru Yoshimura on behalf of the Government of Japan while the Acting County Director of the United Nations Development Program, UNDP, Rokya Ye Dieng singed for the UN Agency at a colorful ceremony held in the Board room of the National Elections Commission, NEC.

Welcoming the three separate delegations including authorities of the Liberia National Police led by Inspector General Gregory O.W. Coleman on the compound of the Commission, National Elections Commission, the Co-Chairperson of NEC Cllr. Sarah Toe said the grant marks an historic support to the Liberian electoral commission to help strengthen the Commission’s Constitutional mandate to conduct a free, fair, transparent and credible election on October 10, 2017.

Speaking before the signing ceremony, the Co-Chairperson of NEC Cllr. Toe told the Japanese delegation led by Ambassador Kaoru Yoshimura, the UNDP Acting Country Director and Police Inspector General, that the grant was very crucial to the entire electoral process and mainly to the major beneficiary, the LNP in the deployment of personnel across the country for the elections.

Speaking for the Japanese Government, Ambassador Yoshimura said the funds were in continued support to an important historic milestone in Liberia’s democracy and nation building and stressed that the world would be monitoring to see how Liberia decides who would take the reins of government after President Ellen Johnson Sirleaf.

“The Prime Minister of Japan, Shinzo Abe was committed to contribute more actively to the peace and stability of Africa, viewing peace and stability as the foundation of African development”, averred the Japanese Ambassador Extraordinary and Plenipotentiary to Liberia.

For her part, UNDP Acting County Director Rokya Ye Dieng the grant is intended to support the deployment of police and other civilian security personnel to provide security during the October elections.

The UNDP Acting Boss expressed appreciation to the people of Japan for supporting Liberia and to the Government of Liberia for seeing the UNDP as a key and faithful partner in its historic transformation process.

Accepting the gesture, a fund also to be managed by the UNDP, Police Inspector General Gregory Coleman described the Japanese Government as a proven and trusted partner who has over the years demonstrated this trust.

The Police Inspector General promised that with these kinds on support, the police will be in a better capacity and will be assessable to provide security to all political actors and non-political actors during and even after the October 10th 2017 Presidential and Representative elections in Liberia.