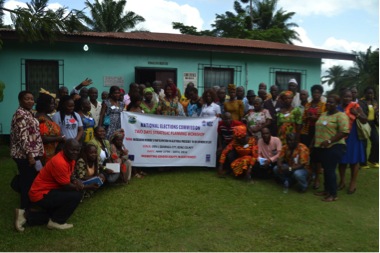 NEC Begins Setting Up Of Gender Committees in Counties

The National Elections Commission (NEC) has begun the process of setting up of Gender and Elections Coordinating Groups in each of the fifteen counties of Liberia.

The Gender and Elections Coordination Groups are intended to formulate measures that would effectively elicit women’s participation both as electorate and candidates during the forthcoming 2017 Elections.

The process is timely for the 2017 Elections, because when established, the Gender and Elections Coordination Groups will build strong networks that would lead to experience sharing and the formulation of strategies for achieving gender parity in the 2017 Elections.

The decision to set the Gender and Elections Coordination Group evolved from a two-day Strategic Planning Workshop held in Gbarnga, Bong County, on May 17 and 18, 2016 under the Theme: Increasing Women’s participation in Electoral Processes to 30% or more by 2017.

The Strategic Planning workshop was aimed at formulating measures aimed at identifying barriers to massive women’s participation in elections in the country.

The workshop brought together more than 80 participants.

They included gender focal persons of the Ministry of Gender and Social Protection in the 15 counties of Liberia, assistant elections magistrates, regional coordinators of the NEC, women’s organizations, among others.

The workshop was funded by the European Union through the UNDP.

Planning towards the 2023 General Elections