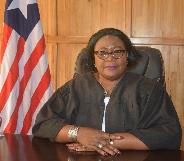 Cllr. P. Teplah Reeves is the current Co-Chairperson of the Commission since August 2020 following the fulfillment of all legal requirements, including the Senate confirmation and commissioning ceremony by the President of the Republic of Liberia, H.E. George Manneh Weah. The experienced legal luminary hails from Rivercess County in eastern Liberia.

Cllr. Reeves possesses10 years of professional working experience in Law and Advocacy, working with Clients, Women Groups, Youths, Rural Women, and the Indigents. She has excellent analytical research and communication skills; legal research and writing, and ability to coordinate multiple tasks to achieve results. She has training in commercial mediation and conflict resolution, training in continued legal education, and an advocate for the rights of women, children, and the indigents.

In 1993, the Co-Chairperson obtained a L.L.M degree in Comparative Law with emphasis in Joint Venture from the George Town University Law Center, Washington, D.C. the USA. Before then, in 1989, she graduated from the Louis Arthur Grimes School of Law, University of Liberia with a L.LB degree in Law after earning a Bachelor Degree in Business Administration also from the University of Liberia in 1978.  Between 1981 and1982, the Co-Chair also obtained an Associate Degree in International Relations and Development from the Institute of Social Studies, in The Hague, Netherlands.

Prior to her appointment as Co-Chair, Cllr. Reeves, during the 2017 Presidential and Representatives elections, served as Legal Consultant for the Commission. She was assigned to the Hearing Section on Dispute and Resolution. She is credited for adjudicating several high profiled cases.

From 2018 to her appointment in 2020, she served as the Chairperson of the Board of Commissioners of the Public Procurement and Concession Commission of Liberia (PPCC).

Cllr. Reeves is also a former Vice President and President of the Association of Female Lawyers of Liberia (AFELL), 2009-2013.